Epic Greed Or Genuine Selflessness? : Gabon’s President, Ali Bongo Who Is Still Recovering From Stroke Campaigning To Be Re-Elected

Gabonese President, Ali Bongo Ondimba made an unexpected appearance on Saturday during a meeting of one of his closest collaborators, sketched a dance step and said to thousands of jubilant supporters: “I am here and will always be there”.

The head of state, who suffered a stroke more than 11 months ago, had appeared a little more often in public since his return two weeks ago from private hospital in London where he underwent “routine medical examinations” and “continued his rehabilitation”.

President Bongo of Gabon made a surprise appearance public yesterday where he addressed supporters.
Mr Bongo suffered a stroke in Oct 2018 & has been seen a handful of times since.
His Head of Cabinet Brice Laccruche Alihanga, urged supporters to vote for him in 2023. 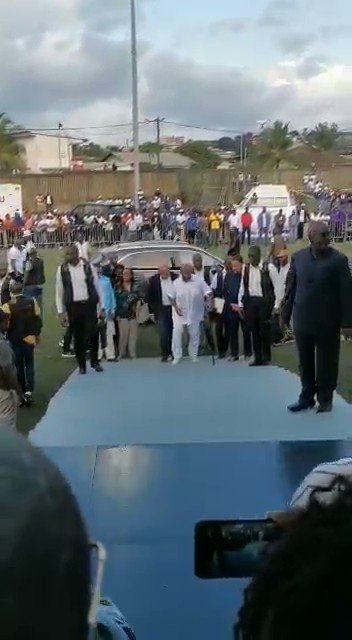 1,687 people are talking about this
But he appeared without being announced just last Saturday before thousands of supporters at the stadium Nzeng Ayong Libreville, at the closing meeting of a tour of the country of one of his closest collaborators, his Chief of Staff Brice Laccruche Alihanga who presented himself as his “messenger”.

“You can not know how happy it is for me to be among you,” Ali Bongo told fans who chanted his name. “I had been dreaming about this moment for quite some time and it happened (…), we have to thank God and I also want to thank you all for the support you gave me, especially during difficult times,” he said. he continued, obviously moved. “I’m here,” he hammered four times, before concluding, “I’m here and I’ll always be there.”

Watch a video below of him struggling to walk with the aid of a walking stick:

Gabon's President Ali Bongo, who suffered from a stroke, campaigning and asking the crowd to vote for him for President again in 2023.