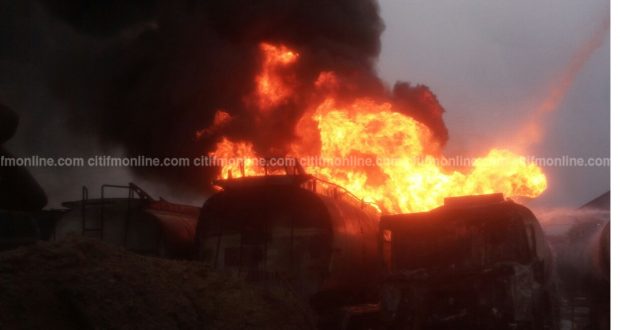 Three persons escaped death when a fuel tanker they were travelling in burst into flames on the Accra-Kumasi highway.

Reports say the fuel tanker caught fire after it had collided with an articulated truck which was trying to overtake another tanker.

According to the Eastern Regional Fire Service Commander, ACFO, Joshua Nguah, it took fire officers several hours to put the fire under control.

“It was three articulated trucks and there was a head-on collision. Two of the trucks were almost on fire. I can confirm that there was an accident and an accident yesterday [Friday, March 25, 2017] highway just after the Anyinam toll booth.”

“The police were there, we were all there, all to make sure that the traffic flows. Till we finished fighting the fire, we had to wait for a very long time to get a recovery car. We finished the recovery work around 0200 hours.”

The fire service has commenced investigations into the incident.