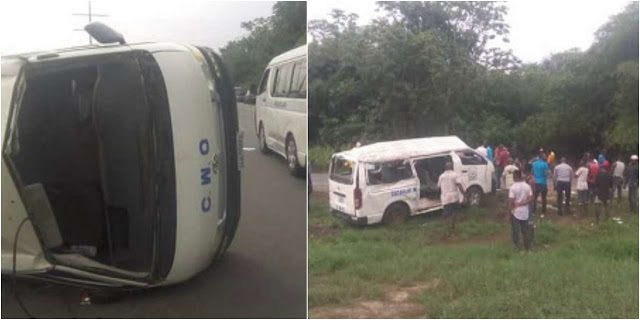 Four women were confirmed dead and six injured when a bus allegedly conveying members of the Association of Nigeria Conference of Principals of Secondary Schools (ANCOPSS) somersaulted along Benin-Warri express road.

The accident occurred between Oghara and Mosogar in Ethiope-East LGA of Delta State,Vanguard reports. According to an eyewitness, who spoke on condition of anonymity, the school principals were said to be travelling to Kwale in Ndokwa West Local Government Area of the State, for a meeting.

“The bus had just left Oghara and was on its way to pick two other principals who were waiting to join them at Okirigwre in Sapele, when close to Mosogar town, the bus had a burst tyre, lost control and somersaulted”, the eye witness said. “Two of the Principals died on the spot while the two others died at the Delta State University Teaching Hospital, Oghara”