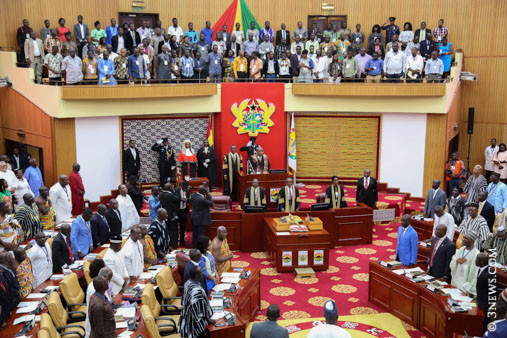 Impeccable information picked up by The Herald, reveals that each of the 275 Member of Parliament (MP), has grabbed a whopping accommodation allowance of GH¢90,000, regardless of whether they have a home in Accra or not.

This paper’s information is that, the MPs were paid the money about three weeks ago, by the Akufo-Addo government from the public purse, despite saying the economy was in distress.

Some MPs The Herald spoke to, confirmed receipt of the cash, but said they have finished dishing it out it to meet the insatiable demands of their constituents. Others said, they used the money to pay debts they incurred during the 2016 Presidential and Parliamentary elections.

What is strange about the rent allowance paid to the MPs is that, even those of them appointed as ministers, are also paid, whether they are living in state bungalow or not.

The cash is GH¢40,000 more than what some of them were paid four years ago. The 90 percent increment it has been argued, was based on the prevailing market rate.

It is unclear whether the leadership of the House namely; Majority and Minority Leaders, their deputies, the Chief Whips and their deputies, also took home the same amount or higher.

There is also information that, discussions are currently ongoing towards giving mouthwatering car loans to the legislators, and already some car dealers, have sent their agents and new designs to the House for inspection and purchase.

The Herald was again informed that the Ministers of State, who are Parliamentarians, will also collect the car loans from the House, same way they have pocketed the rent allowance.

There has always been brouhaha over the decision to give MPs huge rent allowances each 4-year term.

In the past, Nana Akomea, director of Communications for the NPP and a former Member of Parliament (MP) for Okaikoi South, is convinced the country will be better off, if it builds about 300 flats for the MPs in Accra.

Although, Nana Akomea, believes the 300 flats would save the country lots of money in the long run, the MPs have been divided on the matter.

Four years ago, Accra-based Joy FM, during another round of controversy provoked by similar payments, some of the MPs, insisted they are better off being paid part of their salaries as rent allowance, so they rent their own houses.

But the Executive Director of IMANI Ghana, Franklin Cudjoe, had insisted that the GH¢50,000 rent allowance is too much, adding the rent allowance for the MPs, must reflect the economic conditions in the country.

Franklin Cudjoe, would rather the MPs are paid half the amount, but four years on the situation has not changed.