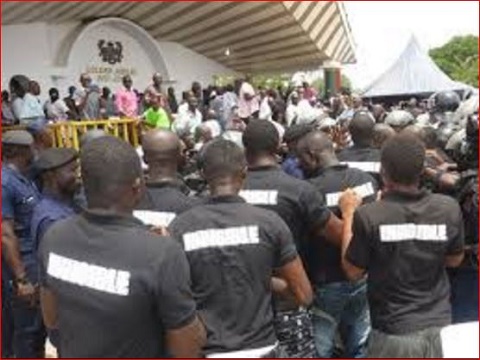 The Interior Minister, Ambrose Dery, has indicated that investigations have commenced into circumstances under which a senior Police officer, was allegedly brutalised at the Flagstaff House.

The then Director in charge of VVIP at the Flagstaff house, ASP Nanka Bruce, was allegedly assaulted, and a video which captured the attack went viral on social media.

The ex-officer, Mumuni Jabel and one Abu, members of pro-NPP vigilante group, Invincible Forces, were caught on the tape assaulting ASP Bruce Nanka at the Flagstaff House in a video that went viral on social media.

An Accra Circuit Court, has also issued a warrant for the arrest of the two persons, who assaulted ASP Nanka Bruce in January.

Answering questions from Kumbungu Member of Parliament (MP), Ras Mubarak, on the Floor of Parliament, the Interior Minister, stated that an arrest warrant has been issued to apprehend one of the suspects, who is also an ex-police officer, Mumuni Jabil.

“Mr Speaker, I’ m aware of a report made by one ASP Nanka Bruce, Director in charge of the VVIP at the Flagstaff House on 9th January 2017, in which he reported an assault on him by an ex-policeman named Mumuni Jabil and one Abu. The matter is currently under investigation by the Police CID and efforts are being made to get the suspects arrested.”

He further noted that the police in an effort to arrest the suspects published the picture of Mumuni Jabil in some newspapers and news portals.

“…And an Accra Circuit court has issued a warrant for the arrest of Mumuni Jabil,” he added.

The Accra Circuit Court issued the warrant about a week ago.

An earlier release signed by the outgoing Public Affairs Officer of the Criminal Investigations Department (CID) of Police, Assistant Superintendent of Police, Joseph B. Dankwah, said the suspect was alleged to have led a group of men to carry out the attack.

The release said the suspect, aged 45, is dark in complexion and hails from Tamale in the Northern Region and is believed to be hiding in Accra, Kumasi or Tamale.

The footage which was taken by CCTV cameras at the seat of government on January 9, 2017 – President Akufo-Addo’s first day in office – showed members of the vigilante group, chasing ASP Bruce as he drove out of the Flagstaff House.

The gentlemen succeeded in accosting ASP Nanka and attempted to seize his vehicle, but the intervention of other security personnel, saved the situation.

Interior Minister, Ambrose Dery has, however, assured Parliament that the assailants will be brought to book.

In a response to how the two suspects had access to the Flagstaff House, the Minister said, he does not have personal knowledge on that.

But he said the act they committed is of serious concern and one that would be investigated and the appropriate punishment meted out to the culprits.