A study from Play Ratings has uncovered that, with fluctuating currency being considered, Ronaldo’s big-money move from Barcelona to Inter Milan would be worth a staggering €433 million in the current market.

After Ronaldo ripped it up in a solitary season at Barcelona, scoring 47 goals in 49 appearances, he signed for Italian giants Inter Milan for €28 million euros in 1997 – breaking the transfer world record for the second time in his career.

It was pretty crazy money at the time but Inter got more than their money’s worth as their star striker notched 59 goals in 99 games despite persistent injury issues.

In the pomp of his career, ‘R9’ was different gravy and going off the information from Play Ratings, his transfer from La Liga to Serie A would be worth nearly double what PSG forked out to land his compatriot last summer.

Elsewhere on the list, which is dominated by Serie A transfers, Diego Maradona to Napoli is equal to a massive €345 million nowadays, while Michel Platini joining Juventus back in 1983 would be worth €334 million. 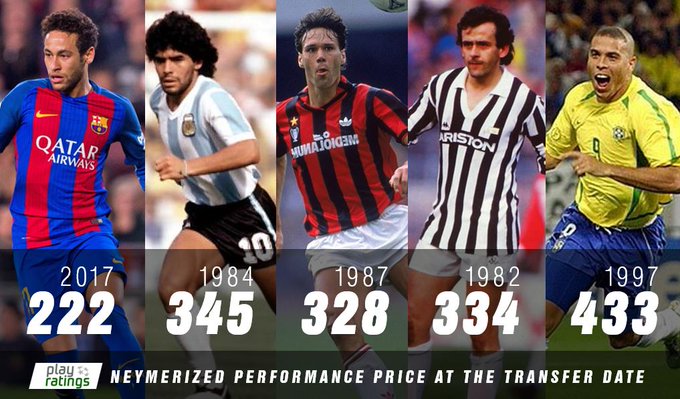 Moreover, Christian Vieri to Inter would cost €334 million, Marco van Basten’s move to AC equates to €328 million, Gabriel Batistuta leaving Fiorentina for Roma would be worth €281 million, and Gonzalo Higuain’s surprise switch to Juventus from Napoli would be equivalent to €264 million if it happened today.