For the second time this season in Italy, Romelu Lukaku has been the subject of vile racist abuse, this time from a television pundit.

Following Inter’s latest win, against Udinese on Saturday, the former Manchester United player has come under more awful racist abuse from TopCalcio24′s Luciano Passirani. Speaking on Italian tv the pundit said, “I don’t see any other player in Italy now like Lukaku. […] I really like him.

“The only way to stop him is to say, Here are ten bananas that you can eat.”

Italian pundit Luciano Passirani after praising Romelu Lukaku: “the only way to push him down to the floor is to throw 10 bananas at him.”

The problem runs so deep in Italian football. 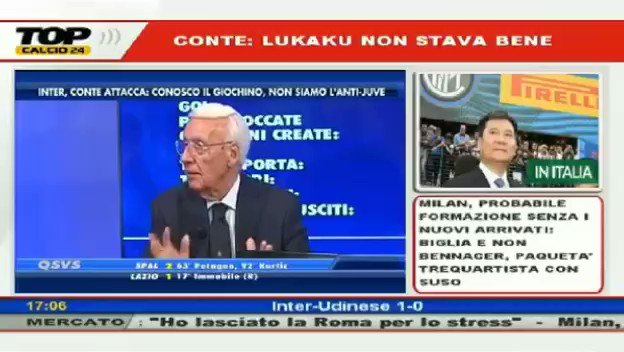 392 people are talking about this

The TV channel immediately suspended the pundit after his remarks on the programme on Sunday, which is quicker punishment than Serie A have managed.

However, Cagliari fans are still waiting to find out if they and their team will be punished or not after their awful behaviour.

Cagliari fans have lately, gained notoriety for their involvement in racist abuses, with the fans similarly directing monkey noises at Moise Kean last season. Sulley Muntari and Mario Balotelli have also suffered racist abuse at the hands of Cagliari fans.

Passirani was however tactful with his comments as he tried to make the racism seem like a way of complimenting Lukaku.

The 26-year-old has started his career in Italy in fine form with two goals in his first three Serie A games and the Nerazzurri now sit top of the table.

Following Juventus’ draw with Fiorentina at the weekend, Antonio Conte’s side are the only team left with a 100% record, as they chase a first title since 2010.

“I Feel Lonely” – How to Overcome Loneliness Permanently

Jamie Foxx Admits He Sabotaged Idris Elba From Getting A Role In Iconic Movie, Django Unchained