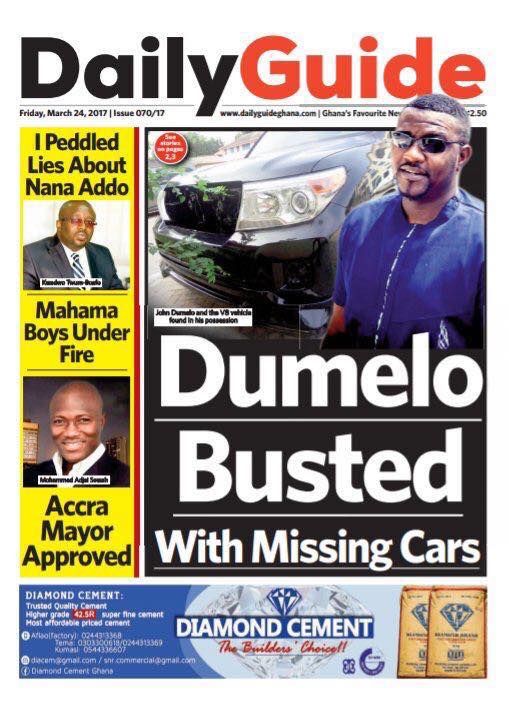 National Security Operatives have caught popular movie actor John Dumelo with a vehicle belonging to the state and retrieved it from a spraying shop.
Dumelo was allegedly attempting to conceal the identity of the black Land Cruiser with registration GE 8118-16 when the operatives pounced on it at a garage at Abelemkpe in Accra where it has purportedly being sent for spraying.
The vehicle, with chassis number JTMHVOJ2F4159829, 2015 model with full option, has been parked at the Office of the President Annex for almost one month.
When the operatives invited him to the garage, he reportedly panicked and shook like rain-beaten chick, before surrendering the expensive vehicle without any protest.
The operatives, upon a tip-off, swooped on the garage a couple of weeks ago and got hold of the auto mechanic who told them that the vehicle belonged to John Dumelo.
He was telephoned to come to the garage and upon arrival, he’s reported to have first said that he bought the V8 from a car dealer, Svani Company Limited, and claimed he was yet to complete the payment.
The operatives then keyed in the chassis number into a centralized computer system but the results showed that the vehicle was registered in the name of the National Security Secretariat which is a property of the Government of Ghana.
Sensing he was getting into trouble, he’s reported to have quickly changed the story, claiming that it was former first Lady Lordina Mahama Mahama who had given the V8 to him.
The security operatives immediately decided to crosscheck from the First Lady to ascertain the facts but the actor (Dumelo) reportedly pleaded with them to stop and just take the vehicle away.
The operatives’ checks at Svani Motors along the Spintex Road indicated that the company imported the vehicle for the National Security Council Secretariat and that the company in one of the several auto dealers used by the government to import vehicles for the state.
When the security personnel got to the garage, the vehicle had been dismantled and was going through remodeling, including re-spraying – with parts allegedly imported from Dubai.
John Dumelo was said to have brought some spare parts from Dubai to enhance the looks of the vehicle.
Daily Guide sources say he reportedly got two V8s from the NDC government, with his girlfriend driving one of them.
When he was asked to direct the operatives to the whereabouts of the other vehicle, he pleaded with them to allow him travel to London and return to produce it.
According to sources, Dumelo had released the other V8 which is believed to be ash in colour to his girlfriend who is currently using it. He told the operatives that he was he was going to return it after the girlfriend had returned from a trip she had used it for. As at press time yesterday, the second vehicle had not been returned.
Dumelo’s Reaction
When he was reached via telephone for his comments yesterday, John Dumelo said “I wouldn’t like to comment about it,”
In 2012, he appeared subtly in the NDC campaign that saw Mr Mahama winning the election in a controversial fashion following the sudden death of President John Evans Atta Mills.
He was very active during the 2016 election which sent the NDC packing into opposition; he was seen on several platforms campaigning for the party prior to the poll.
He was reportedly appointed operations director for ‘Agenda for Mahama’ – a pro-NDC youth group – he was given unfettered access to the various Senior High Schools (SHS) to campaign for President Mahama, although the NDC government had made it look as if he was on tour to campaign for peaceful election.
De-facto Youth Leader
At a point the NDC turned John Dumelo into a de-facto Youth Organiser and made to speak at party programmes even after people like the founder, Jerry John Rawlings, had addressed the crowd.
He emphatically stated that then NPP flag bearer and now President, Nana Addo Dankwa Akufo-Addo, could never be president because Mr Mahama was going to retain power.