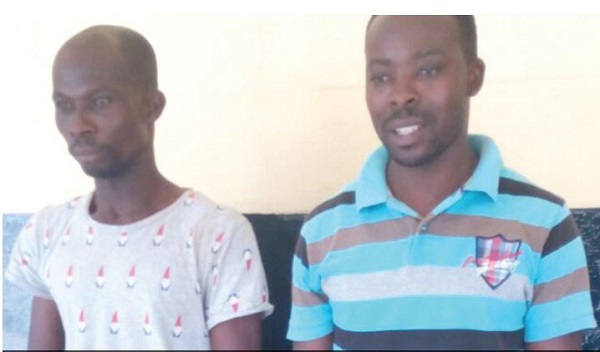 Two men are in the grip of the police for allegedly advertising vehicles on an online trading platform to defraud people.

The two suspects who use the names Yaw Owusu or Emmanuel Osei, 28, and Isaac Akye or Hope Ahetoh,36, and a number of aliases, are said to have engaged in fraudulent sale of cars using tonaton.com, an online trading platform.

Briefing journalists in Accra yesterday, the Accra Regional Police Commander, Deputy Commissioner of Police (DCOP) Osabarima Oware Asare Pinkro III, said the suspects were arrested after two victims who had lost GH¢50,000 and GH¢80, 000 respectively as a result of the fraudulent deal reported the matter to the Osu and Tesano police.

He explained that Owusu and Akye, who had earlier been granted bail by an Accra Circuit Court for similar offences, continued in their illegal activity while the first cases were still pending before the court.

Osabarima Pinkro said the suspects, on February 28, 2017, advertised a Hyundai Santafe for sale on tonaton.com and were contacted by one of their victims.

He said the victim claimed he spoke to a man who introduced himself as Emmanuel Osei, the owner of the vehicle, and the two agreed that they would meet for the vehicle to be inspected and tested.

Two days later, Osabarimah Pinkro said, Emmanuel Osei was said to have informed the victim that he would send a man identified as Hope Ahetoh, and another unidentified man to bring the car to the office of the victim for testing and inspection as agreed.

Following the inspection and test drive, the victim is said to have expressed interest and agreed on a bargained price of GH¢85,000.

He said the victim, however, arranged to make an initial payment of GH¢50,000 and pay the rest later which Emmanuel agreed to.

On March 10, 2017, he said, the victim took Ahetoh and the unidentified man to the Osu Branch of Ghana Commercial Bank to transfer GH¢50,000 into the account of Emmanuel Osei.

The Regional Commander said after the transfer, the victim said he came out of the bank and found that the car and its occupants had disappeared.

Osabarima Pinkro said a report was subsequently made to the Osu police.

He said a CCTV clip retrieved from the bank helped the police to identify the two men, who incidentally were being prosecuted for a similar offence.

Osabarima Pinkro said while investigations were ongoing the suspects used the same modus operandi to defraud another victim at Tesano.

He said on March 23, 2017, a teacher at the New Juaben Senior High School, Koforidua, in the Eastern Region saw an advertisement of a bus on tonaton.com and expressed interest.

After paying for the bus, the victim was asked to go with Owusu to a garage at Achimota for the keys, but while on the way the suspect tried to abscond.

The victim is said to have prevented him from absconding and raised an alarm leading to the arrest of Yaw.

The suspect was later handed over to the Tesano police but while he was at the police station, Akye showed up to present the money to the victim so that his accomplice could be freed and he was also arrested.

Nigerians Voted Me Out Because Of My Fake Accent – Gifty Powers

BBNaija Evicted Contestants In One Photo