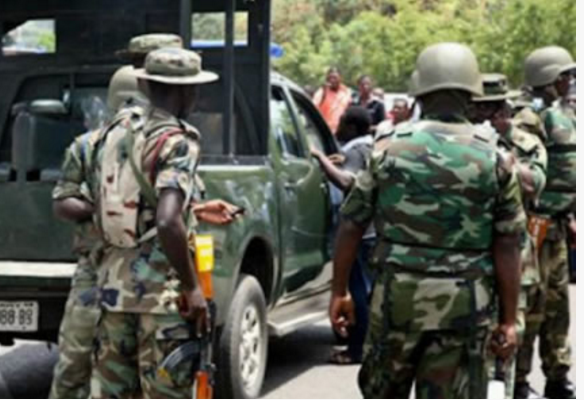 According to Punch, Atume, a resident of Jato Aka in the Kwande Local Government Area of the state, was having a lunch in his parents’compound after returning from school on Tuesday when the stray bullet hit him.

He reportedly died at the spot.

It was also gathered that some members of a vigilance group in the community had intercepted a car conveying some suspected Fulani herdsmen.

The security guards were said to have found arms in the vehicle, which made them to detain the occupants.

A resident, who did not give his name, said the herdsmen alerted soldiers in the Kashimbila area of the state, who raced to the scene and allegedly freed the men, shooting continuously. In the process, one of the bullets killed Atume.

The resident said, “Youths keeping vigilance on the town acted on a tip-off and intercepted a vehicle conveying some suspected herdsmen who were in possession of arms. The suspects called soldiers in Kashimbila who then called their colleagues stationed in Jato Aka to rescue the men.

“The soldiers arrived at the scene and whisked the car and the occupants to their base. The continued insistence of the youth for the vehicle to be handed over to the police angered the soldiers who started shooting indiscriminately into the air to frighten them.

“Ayew (Atume) was killed by a stray bullet. The boy just returned from school and was taking his lunch in his parents’ compound near the scene of the incident when the bullet hit him. He died instantly.”

Another resident said several other persons were injured in the commotion that followed the shootings as people scampered to safety.

“The situation now is such that residents of the town are leaving, while commercial activities have been put to a halt.

The villagers are alleging conspiracy between the Fulani herdsmen and the soldiers to destroy the town. Many residents were injured on Tuesday by the soldiers’ bullets, including a community leader,” he added.

Ayeni, in a statement on Thursday, stated that the vigilantes had mounted an illegal roadblock in the community. He accused them of harassing motorists and other road users, adding that those rescued by soldiers were victims and not suspects.

“Youths in the town mounted an illegal roadblock, especially along the road linking Jato Aka to Taraba State, arresting innocent road users coming into Benue State.

“They detained some visitors, alleging they were Fulani herdsmen. Our soldiers got a distress call and moved there immediately. They were able to rescue seven people and they were moved to our base to ensure their safety.

“At the time of the arrest, they were searched and their vehicles were also searched, but nothing incriminating was found. The police were immediately contacted for further investigation if actually they were coming in with arms.

“While this was going on, the youth regrouped in their hundreds and surrounded the military base, demanding that the seven commuters be handed over to them.

“On the refusal of our troops to hand them over, they became aggressive and started throwing stones into our base. They later started firing at the camp. They destroyed our operational vehicles.

“They also killed a boy in the process. Furthermore, they attacked some traditional chiefs and the Sole Administrator of Kwande LGA who came to appeal to them.

“Our troops rescued the chiefs, but one of them was injured. Therefore, the claim that our troops are protecting Fulani herdsmen is not true. The illegally arrested commuters by the youths are not Fulani people; they are innocent Nigerians going about their business peacefully.

“The Nigerian Army has the constitutional responsibility to ensure the safety of all Nigerians. Inasmuch as we share the pains of those youths, we won’t allow any Nigerian to be unjustly punished or allow their fundamental rights to be tampered with,” the statement read in part.

The spokesperson warned youths against taking the law into their own hands, urging them to report any security breach to the army or the police.